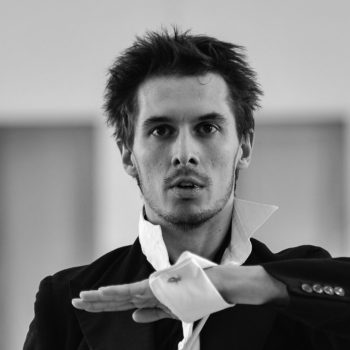 Manu Di Martino is an artist with an unusual career. As a former researcher in biochemistry and genetics at the University of Liège, he starts dancing late on in life – at the age of 24.

At the crossroad between two worlds, Manu Di Martino experiences as much he creates to accomplish his artistic appetite. He merges his origins of researcher in biochemistry and genetics to the dance which he practices lately. His double degree allows him to apprehend this sector with a new look and filled with a belief in the fundamentals of those two passions

As dancer he comes in contact with various dance styles but he specializes in urban dances. He becomes then choreographer / video-maker / visual artist. Involving body movements to those of lights, it’s naturally that he founded the label Okus Lab , a real multidisciplinary laboratory and dance company.

Manu Di Martino continues to evolve in this universe which belongs to him, transcending the established limits between art and science, in order to affix his brand, his signature, his DNA.