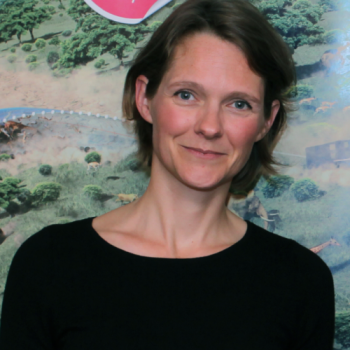 Claire Nouvian is director and founder of the nonprofit conservation organization BLOOM, based in Paris and Hong Kong. Her research and activities focus on deep-sea fisheries and shark consumption habits. In Asia, Nouvian and BLOOM’s co-workers aim to improve the degraded conservation status of shark populations by ultimately making shark fin soup a socially unacceptable dish. Nouvian’s approach is designed to make corporations act as trend-setters in society, specifically the luxury segment of the hospitality industry, andto make the banning of shark dishes part of corporate policy. In Europe, Nouvian is dedicated to studying the nature of deep-sea fishing. Her work on this topic has included the organization of a press conference and “science tour” of political entities, a scientific workshop on deep-sea fisheries in an ecosystem-based context, and a legal workshop on deep-sea bottom trawling. She conducted a detailed analysis on the few remaining deep-sea fishing companies in France to reveal that despite receiving substantial public subsidies, the three main fleet owners are chronically unprofitable. While producing this analysis, Nouvian identified public aid to French fisheries as an area worthy of in-depth research and increased transparency.

Before starting BLOOM, Nouvian worked in television production and journalism, specializing in wildlife and scientific documentaries. She spent an extended period filming in the jungles of Asia, Africa, and South America and eventually contracted two tropical diseases. Luckily Nouvian had already discovered a fascination with the deep sea. Her convalescence allowed her to craft a book, The Deep, published in 2006, and an exhibition of the same name, opened in 2007 at the Natural History Museum in Paris, which present the best specimens, pictures, and film clips that have been gathered by oceanographers over the past 20-25 years.

Today, the exhibition and book have reached more than a billion people. Additionally, Nouvian is involved with education through art and science projects engaging students. She lectures on deep-sea fisheries, fisheries negotiations, public fisheries subsidies, and sustainable development communication strategy at several universities including University of Geneva, Sciences Po (Public Affairs and Environmental Diplomacy), AgroParisTech/ENGREF, University of Hong Kong, University of Rhode Island, and University of Zagreb. While wonder drew her to the depths of the ocean, finding out about deep-sea fishing prompted Nouvian to focus on combating destructive fishing practices. She developed BLOOM as a base to put an end to deep-sea bottom trawling and advocate before governments and institutions in favor of the protection of the ocean’s depths. Nouvian holds a Bachelor of Arts degree in history from Sorbonne University in Paris.